A Saint-Germain-des-Prés Guided Tour is a must when visiting Paris. This nowadays very chic and trendy Paris Rive Gauche District full of book shops, art galleries, and cafés is before all world-famous for its 20th-century golden age. But St Germain is worth much more than that and you will discover in our tour that its exceptional contribution in arts, literature and more generally intellectual life is not limited to this period but last since the early Middle Ages. Don’t miss this Paris Tour of exceptional diversity with a fully accredited tourist guide. Why a Saint-Germain-des-Prés Guided Tour?

Because strolling around alone in Saint-Germain-des-Prés you may perhaps only see a strange old church bell tower standing alongside a wide 19th century Haussmannian boulevard and will then miss the essential, the history of a very old abbey once founded in the middle of the meadows: Saint-Germain in the Meadows (in French Saint-Germain-des-Prés). Our tour is about 1500 years of history of a monks-ruled independent city which finally become the beating heart of Paris Rive Gauche.

Our fully licensed guide will make you discover the multiple aspects of the incredible diversity of this legendary district of Paris.

Our tour makes the most of the richness of the Saint-Germain District, so we deliver a lot of content. Definitely not a tour for those who want something superficial.

The tour is mainly organized around 5 themes

Evolution of ideas, literature, urbanism, arts, and architecture from middle age to the 20th century being a 6th cross-sectoral theme of the tour.

We also offered a 3-hour extended version of the tour in which is added the north Saint-Germain Pont-des-Arts & Institut Zone.

Your Private Guide in Paris

We believe that our Saint-Germain-des-Prés Private tour
Is the most efficient way to discover this mythic district of Paris!

The Saint-Germain church is one of the oldest, if not the oldest of Paris churches.

The church was part of an abbey founded in the mid 6th century, the present building was mainly built from the 10th to the 12th century. Even if it was heavily damaged during the French Revolution period and modified in the 17th and 19th centuries, it remains an exceptional witness of the Romanesque and the Early Gothic architectures.

Our tour includes external commentaries about the church and the ancient abbey.

Each time it is possible (if the church is open to the visit which is normally the case) the tour includes a short passage inside the church.

For those who are more specifically interested in sacred architecture and middle age, we offer a version of the tour which focuses on the church and the ancient abbey. Paris – Saint-Germain-des-Prés church with its newly renovated paintings (frescos), the small columns of the triforium (closed gallery of the choir) are from the first Merovingian church (late antiquity). Photo © Broaden horizons.

The Renaissance and the Wars of Religion

Saint-Germain district houses one of the most famous Renaissance buildings of Paris: the palace of the abbots of Saint-Germain-des-Prés. Built in 1586 this is the second oldest one of Paris in the brick and stone style (after hôtel de Scipion-Sardini in the 5th district).

Saint-Germain-des-Prés is somehow considered the birthplace of French Protestantism, as Lefèvre d’Etaples began his translation of the Bible in the abbey.

During the Renaissance the district was a shelter for the French Protestants (the Huguenots), a St Germain street rue des Marais was even called « little Genova » in reference to the city of French Protestants leader Calvin. The first French protestant synod took place there in the spring of 1559 where is now rue Visconti number 4. 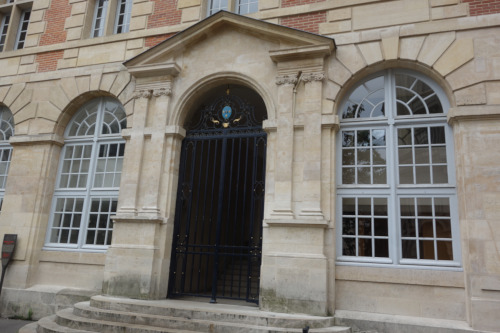 The entry gate of the former palace of the abbots of Saint-Germain with the use of the typical architectural vocabulary of the Renaissance: pediment, pilasters, Ionic chapters, etc. Photo © Broaden horizons

The Saint-Germain-des-Prés Guided Tour also includes an emblematic place of the French Revolution the “Cour du Commerce Saint-André.” In this narrow street, we will speak of major political figures of the period as Robespierre, Marat, Danton, Desmoulins; we will also speak of a more technical one: the doctor Guillotin inventor of the famous and terrible Guillotine!

More confidential, there is also at 46 rue Jacob one of the very few remaining buildings built right during the troubled time of the French Revolution (Directoire 1798). You will also see in the tour that some famous 19th-century painters as David, Ingres, Delacroix, Gros, Monet, Bazille, etc. were having strong links with the Saint-Germain-des-Près District the one of the Académie des Beaux-Arts. A 20th-century one also had some: Picasso who painted noting less than Guernica there and let a sculpture of his mistress Dora Maar in a square alongside the Saint-Germain Church.

This tradition of Saint-Germain-des-Prés painters had nevertheless nothing new, the district already housed a lot of painters in the 17th century for very good reasons we will discover in the tour.

For those who want to go more in depth in this field, a thematic Saint-Germain-des-Prés Fine Arts and Painting Tour starting in Pont-des-Arts, including Saint-Sulpice Church and finishing in the Luxembourg Garden. Saint-Germain-des-Prés, Furstenberg square: Here were standing the abbey stables and later on the workshops of Delacroix and Monet who painted there one of his most famous works: The Luncheon on the Grass. Photo © Broaden horizons.

Litterature and Evolution of Ideas from Middle Age to 17th Century

The importance of text studies for Benedictines monks from early Middle ages to the end of the abbey during the French Revolution.

In the first half of the 17th the Benedictine order (fallen in France into a state of disorganization and laxity) was reorganized via the congregation of Saint-Maur. Saint-Germain-des-Prés Abbey became the siege-house of the congregation and consequently a prominent intellectual center. Saint-Germain-des-Près church is the main vestige of the former powerful abbey siege house of the Saint-Maur congregation. The famous 17th-century philosopher and mathematician Descartes and poet Boileau are buried there. Photo © Broaden horizons.

The establishment of French classical literature and theater in the 17th century with Boileau, Molière, Racine, etc. is strongly linked with the Saint-Germain-des-Prés District. Molière had his theater close to where few years after his death was created the Comédie Française (French Theater Company), the oldest active theater company in the world… Molière portrait, courtesy of nga.

Litterature and Evolution of Ideas from 18th Century to Golden Age

18th-century enlightenment with Voltaire, the Encyclopédistes: Diderot and D’Alembert, or even Benjamin Franklin who is said to have written the project of the alliance of his new republic with Louis the XVI kingdom or some elements of the USA constitution in the famous Café Procope.

You will discover in the tour that the link between Saint-Germain-des-Prés and the beginning of the USA is much stronger than the question of knowing what Benjamin Franklin exactly did in the Procope.

In 1805 the Académie Française (the French academy) is transferred in Saint-Germain-des-Prés.

The first two thirds of the 20th century which correspond to the Saint-Germain-des-Prés Golden Age, a period of considerable contribution of the district to literature with Colette, Albert Camus, Louis Aragon, Raymond Queneau, Boris Vian, Elsa Triolet, etc.  and with also all the poets and writers of the lost generation as Ernest Hemingway, Francis Scott Fitzgerald, etc.

The tour normally ends at the Metro Odeon not far from where was Sylvia Beach’s Shakespeare and Company 1919-1941 bookshop rue de l’Odéon.

For those who are more interested in these subjects, we are preparing a Saint-Germain-des-Prés Litterature tour. The legendary Saint-Germain clearly started at the end of the years 1880 with the creation of three now world-famous cafés: Les Deux Magots, Le Flore, and Brasserie Lipp which will become in the next century the meeting places of intellectuals, writers, artists, and influent people. Café de Flore, view from inside.

The list of all the famous people related is too big to be displayed here (see dedicated literature tour), nevertheless to the question of who were the most iconic customers of the Deux Magots, the answer is obvious: Jean-Paul Sartre and Simone de Beauvoir and their existentialism. The square in from of the café bears their names. View of café Bonaparte building at the crossing of rue Guillaume Appolinaire and rue Bonaparte. Jean-Paul Sartre lived on the 4th floor of this building from which he was having a stunning view on les Deux Magots Café and the Saint-Germain-des-Prés church.

Golden Age is also post-WWWII Saint-Germain music and nightlife with its cabaret, jazz, and Zazou places. It will be also evoked during the tour with places such as Hôtel de la Louisiane, Le Tabou, Le Club Saint Germain, L’échelle de Jacob, Le Bar Vert which were associated with an incredible number of French or International famous People including numerous American jazzmen as Oscar Peterson, Miles Davis, Billie Holiday, etc.

Architecture and Urbanism a Transerversal Aspect of the Tour

The history of this central district of Paris being very ancient, we will discover and understand the evolution of the urbanism of the zone over centuries.

We will for sure consequently discover corresponding architectural styles of these periods: Through the centuries urbanization strongly changed the zone. Open in 1802 at the end of the French Revolution, the rue de l’Abbé cut in two the former territory of the abbey. Photo of an improvised terrace on the rue de l’Abbé sidewalk, the picture also shows the remaining pillars of the abbey eastern entry. A few meters away is the shop of famous chocolatier Maison Leroux © Broaden horizons.

More Time and Comfort for the Rest of Tour

The extra time can be used just to globally spend more time on the tour, or to go more in-depth in certain aspects of the tour: literature, painters, Golden Age, etc.

We can also spend more time visiting Saint-Germain church or the Art Institut (Only if possible, there is no warranty of entrance in either of both monuments). The Saint-Germain-des-Prés 3 hours extended tour starts on the Right Bank on famous Pont-des-Arts built on the order of Napoleon Bonaparte to link the Louvre Museum with the institute. Photo Pont-des-Arts © Broaden-horizons.

End of the Tour – What to Do After

Both tours 2-hour and 3-hour extended normally end in Boulevard Saint-Germain at the Level of Metro Odéon, this is purely indicative as the tour route may vary due to walk rhythm or specific requests of the group as because of contingencies.

What to Do After on/from Tour End Location 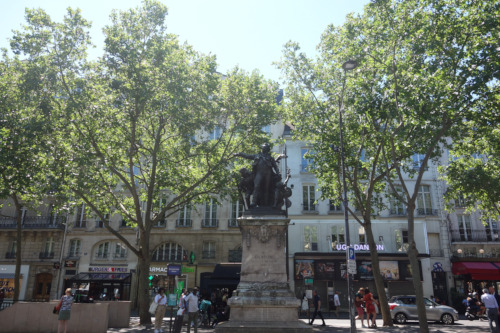 Metro Odéon with the statue of Danton leading figure in the French Revolution. It is where usually ends the tour © Broaden-horizons.

Last if you are particularly gourmand, you can explore all the amazing chocolate boutiques of Saint-Germain.

Chocolatiers in the Tour Zone

Saint-Germain is Paris undisputed bona fide temple to chocolate. One of the world best places for connoisseurs. If you are a chocolate enthousiat avoid Saint-Germain on Sunday and Monday morning as some shops may be closed. The Ladurée boutique (Macarons, Pasteries) of rue Bonaparte is normally on our tour route. Photo © Broaden-horizons.

We rented an apartment in St. Germain and we took this tour on our first day. It was a wonderful history of the area and even though we had been in St. Germain many times, we learned so many new facts, details and architectural nuances of the area. Yves was extremely well prepared and generous with his time and knowledge.