An extensive half a day Van Gogh in Auvers-sur-Oise private tour to follow the footsteps of Van Gogh in the charming village of Auvers where Van Gogh spent the two last months of is life. A tour full of art and emotion in a haven of peace at only 34 km from Paris. 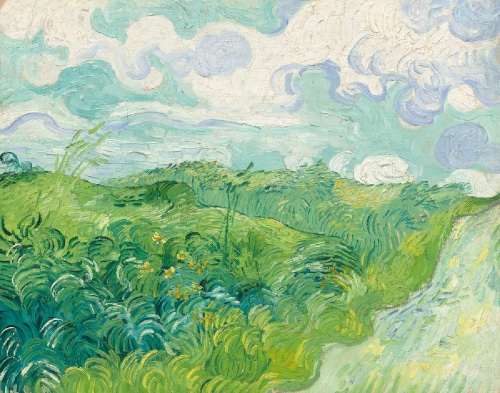 Why a Van Gogh in Auvers-sur-Oise Guided Tour?

Firstly because Auvers is the place where Van Gogh spent the 70 last days of its life, an incredible period of creativity for the artist as he created there no less than 78 paintings.

Secondly because the village of Auvers is a charming place in the countryside.

Van Gogh himself wrote how charming is the place in a letter to his brother Théo “Auvers is very pretty, there is a countryside all around, typical and picturesque”.

Auvers is an artists’ village and many famous ones came there before and after Van Gogh.

The village is borded by wheat fields and the Oise river, it is a great place to escape a few hours from the bussy and fussy French capital and to have a little test of the provincial France.

This tour is a “follow the footstep of Van Gogh” tour. This means that the route of the tour is organized in function of the milestones of the stay of Van Gogh in Auvers.

The idea is to see how Van Gogh mindset changes during the little more than two months of spring and summer 1890 he spent in Auvers and how and why he finally comit suicide.

This tour is designed first of all to be a pleasant walk in a charming French village. On our way we will cross the main square of the village, the auberge where Van Gogh was staying, the medieval church etc.

As this tour is private, the moto is flexibillity and it is possible to adjust how long the walk will be, if a longer walk is not a problem for you we can go till the Dr Gachet’s house.

Museums entries are not included in the tour price, even if we normally enter in Auberge Ravoux (6€) where is Van Gogh bedroom.

We Definitely believe that our Van Gogh in Auvers private tour is a must
for any lover of Van Gogh work!

What to Expect in the Van Gogh in Auvers Private Tour

It is the hostel (auberge) Van Gogh was staying in Auvers. The place is now organised as a little museum which shows the room where Van Gogh lived and died. It is a very simple empty room, nevertheless full of emotion.

Some very famous Van Gogh master pieces where painted there as “the portrait of Doctor Paul Gachet” or “Docteur Gachet’s Garden in Auvers” both visible in Musée d’Orsay.

Docteur Gachet was himself a painter and also an art patron. After the death of his brother Théo Van Gogh gave to docteur Gachet all the works Vincent painted there.

A very intesting landmark for at least two reazons:

This church is the subjet of famous “church at Auvers” master piece which is visible in the Musée d’Orsay. So you will discover the estonishing differences between the real church and the vision Van Gogh was having of it.

Notre-Dame d’Auvers is also a magnificient example of early gothic of the 12th century built at the same time period than notre Dame de Paris.

We will cross a wheat fields which was the subject of one of Van Gogh very last painting the “wheatfield with Crows”.

There are the graves of Vincent and his Brother Théo. Van Gogh’s friend symbolic painter Emile Bernard who came to the burial painted a canvas called “Enterrement de Van Gogh” (Van Gogh interment). 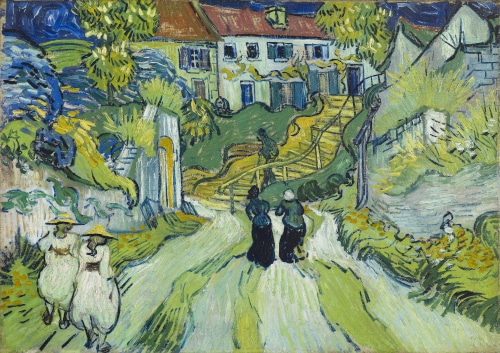 Stairway at Auvers by Vincent Van Gogh painted in Jully 1890

Historians know that Van Gogh works on is last painting  “Tree Roots” on July 27, 1890, the day he shoot himself before coming back to auberge Ravoux  and died there. But till now the question was where were these roots? Well during  spring 2020 Wouter Van de Veen from the Van Gogh Institut found the solution base to a vintage postcard of rue Daubigny at Auvers.

So we now included a new stop in our  Auvers Van Gogh tour to see the now famous roots, they are at only 150 meters from Auvers Church.

Other Painters in Auvers

Even if Auvers-sur-Oise is before all famous for Van Gogh, a lot of painters came there before him as:

Landscape painter Charles-François Daubigny who spent more than two decades in Auvers where he has now his own dedicated museum and where it is also possible to visit his workshop.

Daubigny has is part in 19h century revolution in arts as despite beeing an honorable member of the Académie des Beaux-Arts he was supporting non conventional impressionist painters.

Paul Cézanne also stayed in Auvers following is companion and mentor impressionist painter Camille Pissaro. Cézanne did not focus in painting Auvers main monuments as the medieval church but prefered to represent the patchwork of the house rooftops as in the “Auvers Pananoramic view” (Art Institute Chicago).

But Auvers most famous work of Cézanne is probably The Hanged Man’s House, in which the treatment of volume can be considered as a premice of cubism.

The painting is part of musée d’Orsay collection (also see our Orsay Private Tour) and the scene of the painting is still visible from the street between Dr. Gachet’s house and Champonval train station.

The list of Auvers-sur-Oise painters is long and we should also speak for the 19th century about Camille Corot, Norbert Goeneutte etc., and for the 20th century about Henri Rousseau (Douanier Rousseau), Emile Boggio, Otto Freudlich, Pierre Daboval etc. 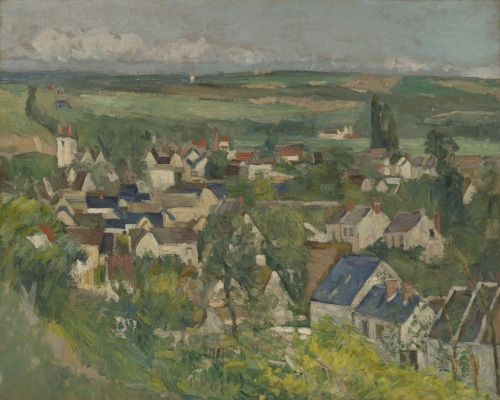 Panoramic View of Auvers-sur-Oise paintend by Cézanne between 1873 and 1875. The tall white building on the upper left is the house of Dr. P. Gachet, which will later be so important in Van Gogh last months.

Museums and Castle at Auvers

A part from Auberge Ravoux where was staying Van Gogh, some other places of interess in Auvers are:

Access: From Paris Saint Lazard then change in pointoise.

Choose below your tour

You will then be  asked : 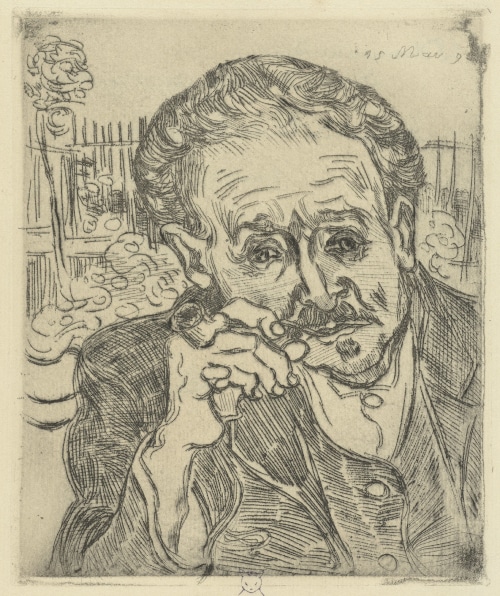 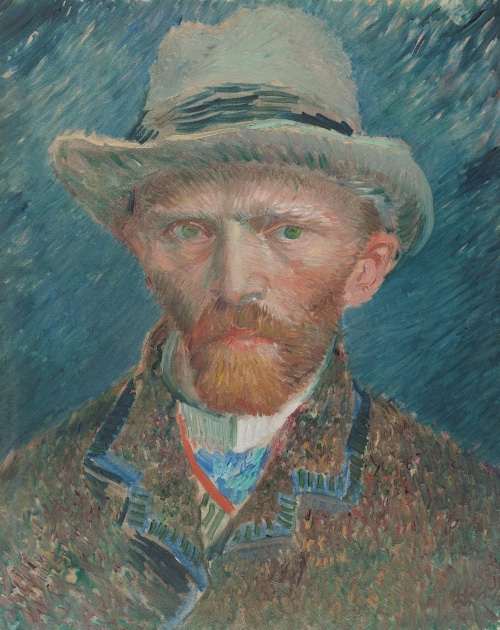