This Marais guided tour is not like the others: it starts in île de la Cité in front of Notre-Dame Cathedral. Why? We think this is a great way to discover and understand the evolution of Paris from Gallo-Roman origin to the medieval era, from Notre-Dame early gothic to Renaissance design and to le Marais 17th century hôtels particuliers mansions. A private tour done by a fully licensed guide lecturer.

Why A Marais Walking Tour startING from Notre-Dame?

Well, just because it is more logical to start to visit a city from the beginning.

This tour does not only gives you the opportunity to discover some of the most important landmarks of Paris, but it is also before all the best way to understand the evolution of the city from Roman Empire to the modern era.

A tour definitively designed for those who like history.

The Notre-Dame to Le Marais Walking Tour is definitively
a must to get a glimpse of Paris from Roman Empire to 19th-century !

Notre-Dame Cathedral harmonic facade with its two symmetrical towers in the morning light. Damaged during the French Revolution the facade was restored in the 19th century by architect Eugène Violet le Duc. Beneath the parvis (from which start the tour) is an archeological crypt where are some vestiges of Gallo-Roman Paris (entry 8 €).

This Island is well known to be the island where is located Notre-Dame, the Paris cathedral, one of the most visited and photographed locations in the whole world. But the Cité island is also the historical heart of Paris, it was in the first centuries of our era the place where was standing a Gallo-Roman city first called Lutecia, which name changed during the beginning of the 4th century in civitas Parisiorum shorten in Paris.

This cathedral is a work of art and poetry. We will start by admiring the details of the facade and go into the symbolism evoked by the artists who built and eventually restored Notre-Dame.

We will get a small taste of the fear and sheer despair felt by the prisoners who were asked to beg for forgiveness and redeem themselves right before they die in front of the portal portraying The Last Judgment.

We will look at the gargoyles, the statues, the shapes, the flying buttresses, the parvis…

Notre-Dame Cathedral facade northern doorway sculptures. Symbolism is everywhere, even in a simple column. The beheaded statue on the photo represents Saint-Denis, bishop of Paris in the third century venerated in the Catholic Church as the Paris patron saint.

We will then walk through some of the quainter and more quiet places passing along Isle Saint-Louis finally reaching Le Marais.

Previously used as pastureland the Saint-Louis island was only urbanized during the 17th century and it is full of hôtels particuliers (private mansions) of the time. They are so many of them that the place is often called “the island of the mansions”.

Ile Saint-Louis is also well known for its famous Bertillon Ice Creams which have the reputation to be the best in Paris.

Night view of illuminated Pont Marie, one of the oldest bridges of Paris (1365).  The bridge links the right bank of the Seine River (le Marais), on the left of the picture, and Saint-Louis Island on the right. The view is taken from one of the bridges we will cross during our Notre-Dame to Le Marais Guided Tour.

This district of Paris, as Ile Saint-Louis, is mainly known for its 17th-century Hôtels Particuliers. Nevertheless, we will see that Middle Ages also left their mark there. The discovery of medieval Paris is an important aspect of our Notre-Dame to Le Marais Walking Tour.

In fact, Le Marais is one of the oldest districts of Paris which follows the traces of the ancient French kings as well as the various revolutions and riots which were not too scarce in the Paris of the past.

After evoking disappeared fortresses and royal palaces, the tour will come to an end as we pass through the unexpectedly quiet urban Village Saint Paul where tourists are encouraged to take in the beauty and peace of this off-the-beaten-track spot in Paris.

Ultimately, our Le Marais Guided Tour will come to a full closure at the prestigious Place des Vosges, initially named “Place Royale”, it is the oldest square of Paris and the most famous sightseeing of Le Marais. Built by the willingness of Henri IV, it is finally inaugurated for King Louis XIII’s wedding in 1610. A few times later the square became famous for its sword fighting duels as related in the famous Three Musketeers Alexandre Dumas Novel.

The Place des Vosges, formerly on of Paris Royal Square. Victor Hugo lived on the second floor of the hôtel particulier located at number 6 of the square where is now the Maison de Victor Hugo a City of Paris Museum with free entrance for the permanent collection.

Historical Periods Broached During the Tour

People We Will Speak About During the Tour

Close to Notre-Dame Cathedral,
exact meeting point is given in booking document.

Any questions? Write at [email protected] 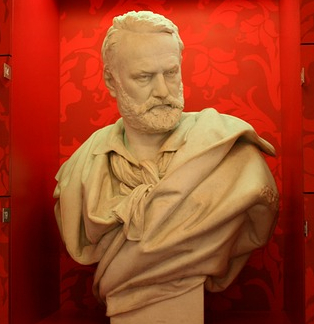 Bust of Victor Hugo photo, the famous French writer author of the Hunchback of Notre-Dame de Paris. You will see that the novelist will “follow” us all along during our Marais Walking Tour. Credit Pixabay 139904