Follow us on our Napoleon Tour in Paris. Discover the favorite district of the lieutenant Bonaparte and how later on the young general opened his way to power in Paris. Figure out the plans of Emperor Napoleon to make Paris a capital which suits his newly built Europe! Enjoy an extensive 3 hours really private tour in the footsteps of Napoleon to discover Paris under Napoleon with a passionate postgraduate fully licensed tour guide.

The Emperor Napoleon I

If you plan to visit Napoleon Tomb after the tour by yourself don’t book a tour departure after 1PM (13h).

The Arts under Napoleon

Why a Napoleon Tour in Paris?

Because Paris is definitely the place where Napoleon left his most important marks. There are a lot of ways to follow in the footsteps of Napoleon In Paris as for example:

but before all, we will discover the dream of an emperor to make Paris the capital city of its new-built Europe.

Tour’s main idea is to optimize your time with your guide. This tour then is an optimized route to discover, walking, the Paris of Napoleon.

So opposite to other Napoleon tours, we do not include in our standard tour places that you can easily visit without a guide (such as Invalides for example).

Nevertheless, If you want to do a short visit to Napoleon Tomb by yourself after the tour, it is normally possible if you book a tour departure, not after 1 PM (13h), it is all explained in the after the tour section.

We can also for sure organize more extensive Napoleon tours adding extensions to our route y/or visit of museums.

We Definitely believe that our Napoleon Private tour
Is the most efficient way to discover the Paris of Napoleon!

The Young Officer Bonaparte in Paris

Bonaparte an Ambitious General in Paris

Napoleon and the Economy

Napoleon and the Arts

Napoleon and the USA

Napoleon and its Diplomacy

Architectural Style of Napoleon in Paris

Paris the Dreamed City of Napoleon

Napoleon transformed the old still mainly medieval Paris into one of the most enlightened cities in Europe. His work is huge:  Inforcing streets numbering, finishing the Louvre palace, creating the rue de Rivoli and a new district for Paris, creating markets, fountains, quays, sidewalks, sewers, etc. The ambition of Napoleon for Paris, a city he wanted to convert to the capital of Europe, was without limit.

And Much More about Napoleon in Paris

Napoleon III the other French Emperor

Learn about the other French Emperor Napoleon III, the nephew of Napoleon Bonaparte.
Learn how Napoleon III, 37 years after the dramatic fall of the First French Empire continued his uncle project of a new redesigned Paris and how the Second Empire is given high credit for the rebuilding of Paris with broad boulevards as on our route: Avenue de l’Opéra, rue de Rivoli or Boulevard Saint-Germain.

Also Learned about his wife, Eugénie de Montijo, the last French Empress who was still alive in 1919 and the sade story of their only son, the Prince Imperial who died in South-Africa during the Anglo-Zulu War under the British Flag.

Our route will also cross three of the world’s most famous hotels: Le Meurice and Hôtel de Crillon which are two Palace hotels and  Le Ritz is an iconic world-class luxury hotel, a symbol of high society and luxury.

End of the Tour – What to Do After

It is not possible to tell you where the tour ends exactly in such a long tour it is depending a lot on the customer (the number of questions asked, the walking pace, etc.) or any other contingency. If everything goes well we should normally end the tour around place de la Concorde. If we are exceptionally efficient we may reach the Esplanades des Invalides midway between the Invalides and the Seine River.

What to do After: Leaving the Area

What to do After: Continue with Napoleon

If you plan to do a (short) visit to Musée de la Légion d’Honneur or Invalides (Napoleon Tomb), don’t book a tour departure after 1PM (13h), if you want to have a chance to reach it.

Few Milestones of the Napoleon Epic

1807 Battle of Friedland, one of Napoleon Bonaparte’s greatest victories. An apex milestone of the First French Empire. 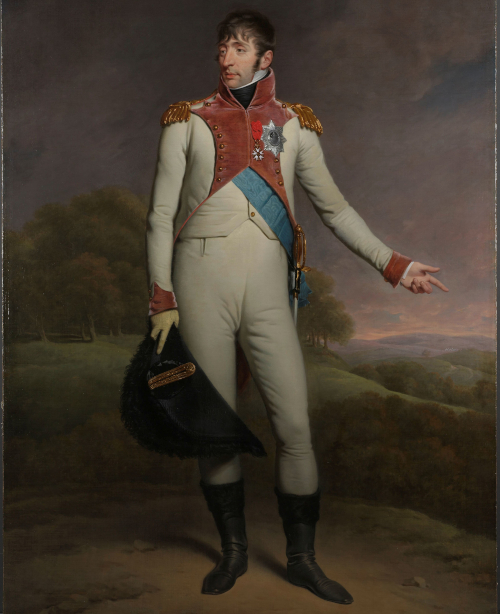 Portraits of Hortense de Beauharnais and Louis Bonaparte. This emperor’s brother was married to empress Joséphine’s daughter. They were king  & queen of Holland, but Hortense preferred to stay in Paris than in her kingdom. Her brother Eugène de Beauharnais was Vice King of Italia. She is a central figure of the two French Empires as her soon Charles-Louis-Napoléon Bonaparte became Emperor Napoleon III.

Possible Tour Extensions in Other Napoleon SiteS in Paris

The route of the 3-hour Napoleon private tour in Paris has been designed to concentrate a maximum of Napoleon-related places.

But the tour has also been designed to easily authorize extensions. Extensions of the route as a museum visit. Following this principle we have designed a Napoleon in Paris full-day tour with :

The way we have extended our Napoleon 3-hour tour to create our Napoleon full-day tour is far to be the only one, There are many possibilities, extensions of the route can be made in all directions.

These extensions can also be visits to monuments and museums:

Contact us if you need a customized extended tour

Other Napoleon Sites in Paris Area

Malmaison: The house of Empress Joséphine and Napoleon.

Château de Rambouillet: Napoleon spent there from 29 to 30 June of 1815 his last night in the Paris area before leaving to meet his final fate.

Château de Fontainebleau where Napoleon left his soldiers before departing for his first exile on the island of Elba.

Parc de Saint-Cloud: The château de Saint-Cloud (destroyed) was the residence of Bonaparte when he was First Consul of the French Republic.

Grand Trianon (Versailles) was fully refurnished by Napoleon who stayed there on various occasions. Most of the rooms are still furnished in the Empire Style.

Napoleon OUTSIDE of Paris Area

Château d’Orléans-la-Source: Napoleon never went there, but at only +/- 120 km of Paris the place is fascinating for a real fan of the First Empire. It is where Marshal Davout gave the submission of the rest of Napoleon forces (standing along the Loire River) after Waterloo. It was the 14th of July of 1815, the final end of the Grande Armée. Next morning at first light Napoleon embarked on board the Bellerophon and made himself prisoner of the English. The Château can’t be visited but we propose a tour of the park of the château one of France most beautiful gardens ( 35 hectares).

Excellent Private Tour on the Life and Times of Napoleon Bonaparte

We had a terrific tour of the many sites in Paris related to the life and times of Napoleon Bonaparte by our tour guide Yves. He was knowledgeable, friendly, and really tailored the tour to our interest. Being that we are from the US, he also pointed out many sites related to early American events such as visits by Ben Franklin and places such as the signing of the Louisiana Purchase and armistice between the US and Great Britain. The tour was packed with information and be prepared to see a lot of sites. The highlight for us was the visit to Les Invalides where Napoleon is buried.

Myself and my partner took part in a Napoleon tour organised by Broaden Horizons and conducted by the wonderful Yves. It really was a fantastic 4 hours walking through the streets of Paris with someone who was both passionate and knowledgable about his topic. Yves was also fun to be with and actually continued the tour beyond its finish time to be sure every topic was covered. A genuinely fantastic time and one we will both remember for a long time. Thank you Yves.

Next to the exit of the metro station “Grands Boulevards” in the 2nd arrondissement (district) of Paris.

Emperor Napoleon I in Coronation Robes. The portrait was painted in 1806 by François Gérard pupil of Jacques-Louis David, Gérard became an official painter of Napoleon as of Louis XVIII and Charles X.

Empire silhouette of Madame Talleyrand. You can notice in this painting also by Gérard, the similitude with the portrait of Napoleon in terms of style of the furniture as in the large use of the famous Green Empire color.