A 17th-century French painting Louvre private guided tour to understand why the period between Renaissance and the Century of Light is such a primordial milestone in French painting. A key moment in arts where began French Classicism and Academicism. To be discovered with our licensed guide.

The Disembarkation of Cleopatra at Tarsus by Claude. Credit The Yorck Project – GNU Free Documentation License.

Your Private Tour Guide in the Louvre

Gabrielle d’Estrées and one of her sisters by an unknown painter, “Hesselin Madonna” & “Portrait of Louis XIII” by Simon Vouet, “Portrait of Cardinal Richelieu” by Philippe de Champaigne, “Et In Arcadia Ego” by Nicolas Poussin, “The Disembarkation of Cleopatra at Tarsus” by Claude, “Still life with Water Wafers” by Lubin Baugin, “The Magdalen with the smoking flame” by Georges de la Tour, “Peasant Family in an Interior” by le Nain Brothers, “The Muses: Clio, Euterpe, and Thalia’ by Eustache Le Sueur, “Laban Searching Jacob’s Bagagge for the Stolen Idols” by Laurent de La Hyre, “Chancellor Séguier and his suite” & “The Sleep of the Infant Jesus” by Charles Lebrun, “Louis XIV Arriving in the Camp in front of Maastricht” by Adam-François Van der Meulen. “Portrait of Charles Le Brun” by Nicolas de Largillière, Pierre Mignard Self-Portrait, “Portrait of Martin Desjardins” by Hyacinthe Rigaud.

A selection of carefully selected other masterpieces to better explain the historical context and artistic evolution of the French 17th century.

Because the French call the 17th century “Le Grand Siècle” (the great century) it is their century, the one of Louis XIV, the Sun-king.

A period in which France was politically, militarily, and economically the dominant power in Europe, and in which its influence on art also grows considerably.

In the mid 17th century was created the Royal Academy of Painting and Sculpture,  which had a considerable influence on French Art (and, moreover, in the arts worldwide).

Organization of the Tour

The tour is organized to develop two parallel approaches.

Knowing that the tour follows as much as possible a chronological coherency.

Arguing About What Painting is

In the very last year of the 16th century after a long period of civil war (French Wars of Religion), Henry IV decided to restore the Château de Fontainbleau. He called three painters for the task: Ambroise Dubois, Toussaint Dubreuil, and Martin Fréminet, they were working in a late mannerist style, the last glimmers of the Renaissance.

The leader of the French Baroque. In 1627, after 15 years in Italy, he was summoned by Louis XIII to come back in France. Most of the painters of his generation were trained in his studio in Paris among them Valentin de Boulogne, Charles Le Brun, Pierre Mignard, Eustache Le Sueur, Michel Corneille l’Ancien, etc.

The leader and founder of the French Classicism (French Classical Baroque style). His Grand Style (Grand Maner) will have a considerable influence on the 17th-century French painting, as later on, in the 18th century English School of Painting. 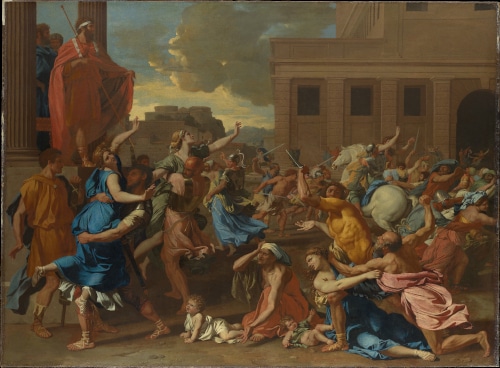 The Rapt of the Sabine by Nicolas Poussin, Leader of 17th-century classism. There are two versions of this painting, this one is the one of the MET, we will compare it during the tour with the one of the Louvre and you will see how deeply Poussin was working his painting.

Strongly influenced by Caravaggio, de La Tour painted some of the most prominent chiaroscuro masterpieces.

Rediscovered like Georges de la Tour by the 1934 exhibition “painter of the reality,” Beaugin had a peculiar career and is difficult to classify. One of its four known still lifes is considered to be the ultimate one of the French 17th century.

Born Claude Gellée, he was a light and landscape genius. Claude notably influenced Turner and was considered by John Constable as “the most perfect landscapist the world ever saw“.

Famous for their genre paintings describing the daily life of humble people (bambochades), they were also practicing the chiaroscuro as in there Saint Peter’s Denial.

Louis XIV and the Royal Academy of Painting and Sculpture

The academy was founded in 1648 with the support of Mazarin (prime minister of Louis XIV) under the leadership of Charles Lebrun with a group of other prominent painters: Philippe de Champaigne, Laurent de la Hyre, Sébastien Bourdon, Louis Boullogne, Eustache Le Sueur, etc.

Pierre Mignard was the great rival of Charles Le Brun. When Le Brun died in 1690 he was replaced by Mignard as Louis XIV’s first painter and head of the Royal Academy.

The formalism and the teaching of the Royal Academy of painting and sculpture had a huge influence on art development in France as in the rest of Europe.

At the end of the tour, and then of the period, we will discover some works of other eminent members of the institution: Nicolas de Largillière, Hyacinthe Rigaud, Charles de La Fosse, Antoine Coypel.

A Glimpse of the Tour

As Baugin was not from Paris it was only possible for him to work in the Germain-des-Prés Faubourg with the other non-Parisian artists including a colony of Flemish and Dutch painters.

The northern influence in Lubin still lifes (which were painted between 1630 and 1635) is obvious. In “Still Life with Wafer Biscuits,” the strength of the work probably comes, first of all, from its starkness, the way to represent empty space. The Dutch called this kind of work breakfast pieces (composontbijt) and they are not supposed to be anything else than the subtle representation of an instant of the past of reality are the keys of reading before any symbolic interpretation. But in Baugin’s masterpiece, the temptation is big to look for hidden significations.

The difference of style between young Lubin Baugin still lifes and his later on religious paintings also remain an enigma. Experts long time thought that they were the works of two different painters. You will be able to make your own opinion thanks to “The Sleep of the Infant Jesus” another jewel also presented in the same Louvre’s room.

This 17th-century French painting tour is part of a series of four “Le Louvre French Painting Tours” covering the subject from the Middle Age to the first half of the 19th century. So do not hesitate to contact us if you want to follow the full cycle. Knowing that our Musée d’Orsay tour covering the period from 1850 to 1914 is somehow the fifth part of the cycle.

The Magdalen with the smoking flame By Georges de la Tour the French master of chiaroscuro. There are many versions of this painting this one from the LACMA is the closest to the Louvre one.

Louis the XIV is the dominant figure of the 17th century. This portrait in Coronation Robe by Hyacinthe Rigaud is King Sun’s most famous one. A lot of replicas have been realized by his studio. The original is in the Louvre (Photo credit Getty Museum).