The French 18th century is historically a century of changes. It was also the case in arts. Discover this attaching and shining period with a licensed guide lecturer thanks to our 2-hour Louvre 18th-century French painting private tour. 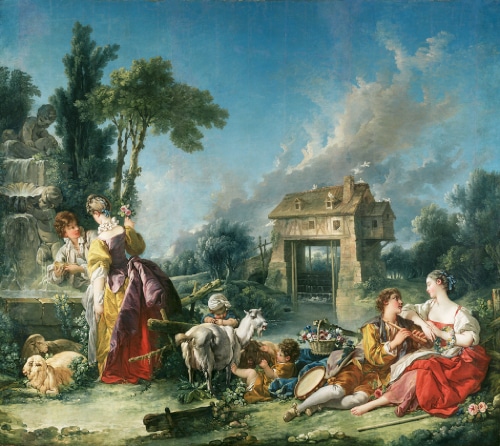 François Boucher is with Antoine Watteau and Honoré Fragonard a reference for 18th-century Rococo. Le Louvre owns a lot of Boucher paintings as pastoral landscapes with a watermill, a popular theme also displayed in other museums as on the photo (L.A. Getty version).

« The Embarkation for Cythera » & « Pierrot » by Watteau; « Susanna at the Bath » by Jean-Baptiste Santerre; « The Ray » & « The Buffet » by Chardin; « Les attributs des arts » by Anne Vallayer-Coster, « Diana Leaving the Bath » & « Le Déjeuner » by François Bouchet; « Scenes of the harbors of France » series by Joseph Vernet; « Peace bringing back abundance » by Elisabeth Vigé Lebrun; « The Bolt » & « Coresus Sacrificing Himself to Save Callirhoe » by Fragonard; « Broken Pitcher » by Jean-Baptiste Greuze; « Psyche Receiving Cupid’s First Kiss » and « Empress Marie-Louise » by François Gérard; « Portrait of the young girl » by Pierre-Narcisse Guérin; « Portrait of Madeleine » by Marie-Guillemine Benoist and some amazing portraits and history paintings by Jacques Louis David.

A selection of carefully selected other masterpieces to better explain the historical context and artistic evolution of the French Revolution century.

Why the 18th Century French Painting?

Because the French 18th century is called « le siècle des lumières« , literally the « century of lights » which is called in English the Age of Enlightenment, a brilliant period then.

Nevertheless, this century is also in France a century of great changes. A century which begins with Louis XIV absolutism, which then saw France losing its dominant position for the benefit of England, and finally arrived the French Revolution, the fall of the monarchy, and the beginning of the Napoleonic period.

You will discover in this tour that in terms of changes the world of painting was not outdone. The French 18th century in painting is very astonishing: a firework of innovations under the strict control of the Royal Academy of Painting and Sculpture.

The Royal Academy was suppressed in August 1793 following a request of Jacques Louis David as a deputy of the National Convention, it was 7 months after the execution of Louis XVI, two months before the one of Marie-Antoinette. The beginning of a new story.

Few Glimpses of the Tour

Both of them Jean-Baptiste Greuze and Elisabeth Vigé Lebrun were exceptional painters who had in common their problems with the French Academy of painting and sculpture.
Jean-Baptiste Greuze was an exception, in the time of a riot of nudity by François Boucher, he developed antinomic moralizing genre subjects influenced by seventeenth-century Dutch painting. The most famous of these paintings « L’Accordée de Village » is among others in the Louvre. Jean-Baptiste Greuze also painted charming paintings of young women with subtle implicit sense as in the « Broken Pitcher« . Elisabeth Vigé Lebrun as Greuze, was having amazing success, in her case in portrait painting. She was even the favorite painter of Queen Marie-Antoinette herself. The academy reception painting pieces of both painters « Peace bringing back abundance » and « Septime Severe et Caracalla » are shown in the Louvre galleries. We will see how talent was not always sufficient to get the favor of the famous French art institution.

Pierre Rosenberg (Member of the Académie Française, président-directeur of musée du Louvre from 1994 to 2001) wrote in his Dictionnaire amoureux du Louvre (2007) about the portrait of Madame de Sorquainville « Son sourire? Celui d’une Joconde du XVIIIe siècle, d’un XVIIIe qui parlait et pensait français… « . This portrait should be more famous than it is. It is clearly one of the Jewel of the Louvre. Painted by Jean Baptiste Perronneau the challenger of Quentin de la Tour in the Pastel, the Canvas despite being oil realized reflect a lot of the aspects of the 18th century most desired portrait technique. You have to be in situ to understand why it can be compared to Mona Lisa, The quietude, the attitude, the eyes, the smile …

Don’t miss the opportunity to follow our louvre 18th-century French painting tour
to discover the artistic side of the French century of light!

Learn already how to recognize Rococo from previous Baroque:

The new style is also recognizable to the wide use of flower ornamentation and warm pastel colors (such as light blue or green).

One of the most popular art forms of the Rococo and Enlightenment-era is missing in the Louvre 18th Century galleries: the pastel. Despite owning the first pastel collection in France, the Louvre rarely shows them because of their fragility which discourages their exhibition in the world’s most visited museum. Nevertheless, if you are an 18th-century fan, France’s second-largest pastel collection is shown as part of the permanent collection of more quiet Orléans Museum of Fine Arts at only a little more than 100 km from Paris.

This 18th-century French painting tour is  part of a cycle of  four:

Knowing that for the second half of the 19th century, you will have to follow our Musée d’Orsay Private tour (covering the period from 1850 to 1914). So do not hesitate to contact us if you want to follow the full cycle. 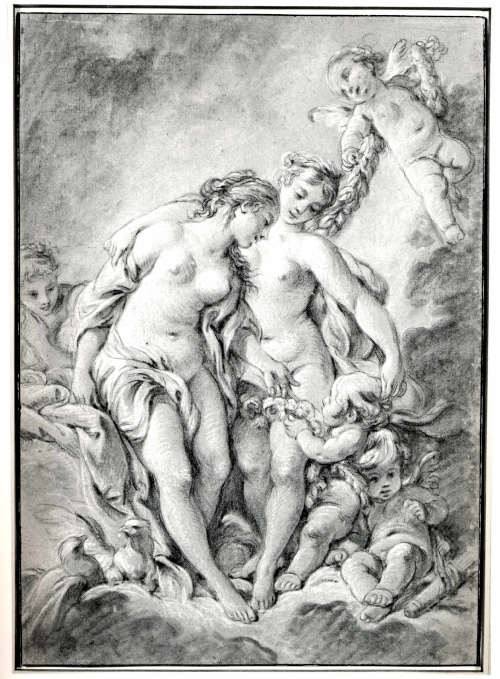 Nude was also a recurrent theme in Boucher’s Rococo. 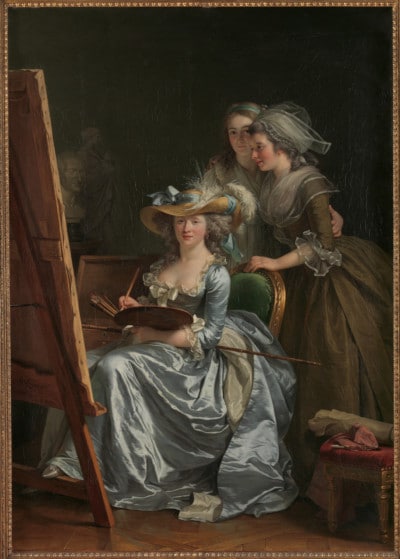 Self-portrait of Adelaïde Labille-Guiard. She was admitted to the Académie on the same day that her rival Élisabeth Louise Vigée Le Brun. Credit: The Metropolitan Museum of Art, New York, Gift of Julia A. Berwind, 1953.