A Saint-Germain tour dedicated to the Saint-Germain-des-Prés church and ancient abbey. Made by a passionate fully licensed guide lecturer, this guided tour of the oldest church of Paris and its former outbuildings also focuses on sacred art and architecture. 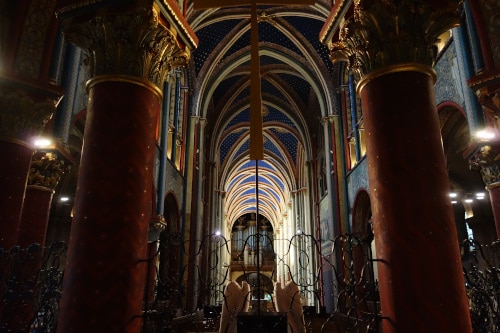 What’s in the tour appart from French history?

Because if this Paris district is nowadays world-famous for its 20th-century golden age, Saint-Germain-des-Prés was historically before all a powerful independent abbey at the gates of Paris.

The church of St Germain is the most spectacular remains of the ancient abbey.

But it is not only (with Saint-Pierre-de-Montmartre) the oldest church of Paris, it is also an exceptional and unique witness of Capetian France’s early Romanesque and early Gothic architecture.

The abbey-church is also worth a visit for its magnificent just restored 19th-century murals.

But the church is not the only remain of the ancient abbey, less spectacular or visible ones can be found all around, they are key to understanding the district.

The tour is mainly organized around 4 themes:

Structure and evolution of Christian architecture being a 5th transversal theme of the tour.

A special focus on 19th century Flandrin’s murals can also be made.

Your Private Guide in Paris

a very special Paris private tour to encounter
the most ancient roots of Saint-Germain-des-Prés!

Other Buildings and Vestiges of the Abbaye

A brick and stone witness of the last period of the French Renaissance.

Biggest Witnesses of the Abbaye

Learn to read the Saint-Germain-des-Prés district map and discover how much streets position and organization are directly linked with the ancient abbey.

After a five years restoration program (2015-2020) murals are now magnificent!

Flandrin was the preferred pupil of Ingres the most famous 19th-century, neo-classical French painter.

In charge of the ornamentation aspect of the restoration of the church, Flandrin developed and employed a hot wax, Renaissance-inspired painting technique.

The themes of the frescos are exceptionally rich, as Flandrin was helped by a Jesuit expert in the history of arts, called father Cahier, for their selection: below are some of the frescos themes: 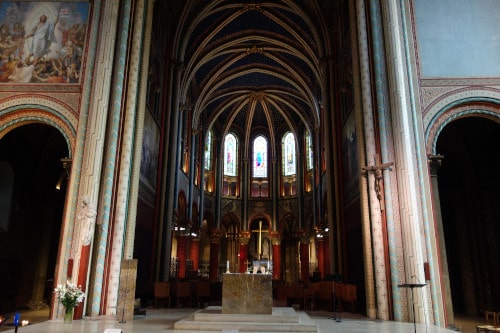 Paris – Saint-Germain-des-Prés church with its newly renovated paintings (murals), the small columns of the triforium (closed gallery of the choir) are from the first Merovingian church (late antiquity). 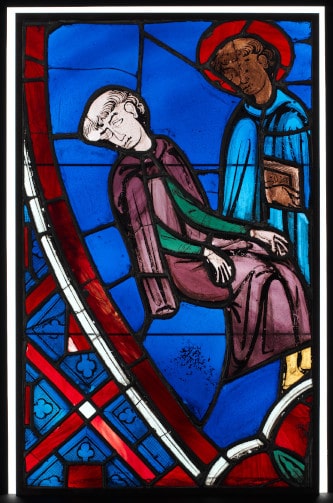 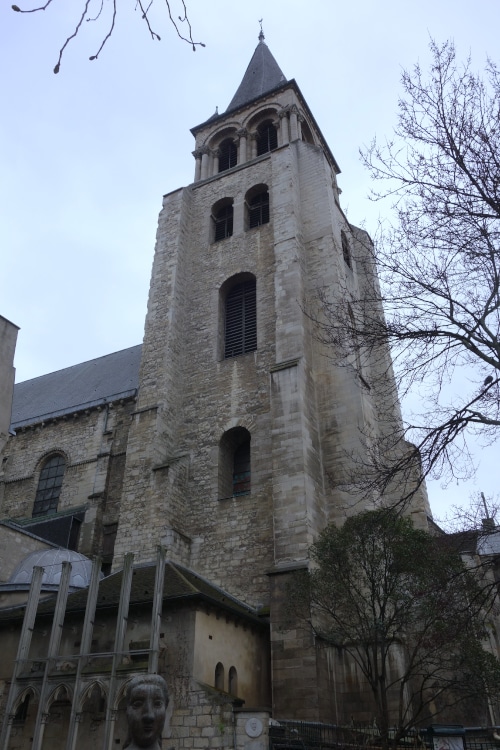 The bell tower of Saint-Germain-des-Prés Church which was built around the year 1000, the sculpture in the foreground is from Picasso.